Mortgages: to fix or to float; that is the question

Mortgages: to fix or to float; that is the question

John Hearne looks at the reasons why now is looking like a very good time to opt for a fixed-mortgage, or indeed to switch your account 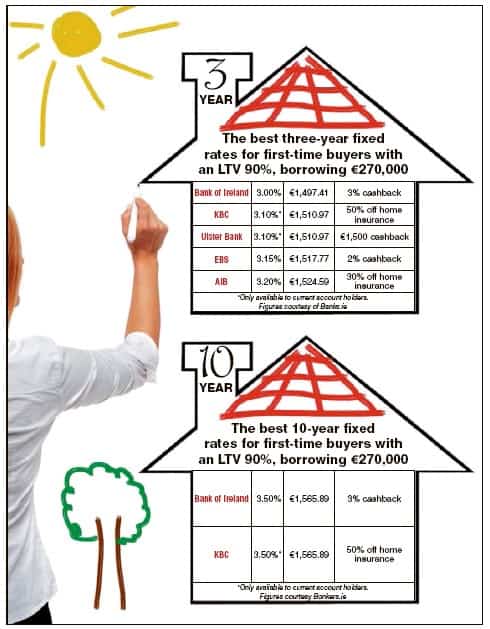 It’s a good time to opt for a fixed mortgage, or indeed to switch your provider altogether.

THE question of whether or not to choose a variable or a fixed rate mortgage isn’t just for those who are about to buy a house.

Unless you’re one of the lucky ones who secured one of the highly prized tracker mortgages during the boom, your mortgage needs regular care and attention. Fixed or floating is a question that should be asked frequently during the life of the loan.

Increasing competitiveness in the market has seen a flurry of cuts in variable rates, together with the introduction of a raft of financial incentives to buyers and switchers. In the last few weeks, however, we’ve seen significant developments in the suite of fixed-rate products on offer from the banks.

Popularity of fixed-rate mortgages is ‘soaring’

Joey Sheahan is head of credit with mortgage broker MyMortgages.ie.

He says that fixed-rate mortgages are ‘soaring’ in popularity.

He said: “Ulster Bank has just announced a range of new fixed rate offerings, and the market perception that the European Central Bank (ECB) will raise their base rate at some point during 2018 means that we will see, and have seen people flocking to make the switch from standard variable rates.”

Data from the Central Bank bears this out. Fixed rate mortgages accounted for 55% of new mortgages in the three months to January 2018.

Joey Sheahan believes that the take up of these fixed rate products could mirror the euro area average by the end of the year, where they accounted for 80% of new agreements over the same three-month period.

A fixed rate mortgage, as the name suggests, is a home loan that has the same interest rate every year for an agreed period of time.

In Ireland, the longest fixed rate mortgage available is 10 years. In Europe — where the market is much more competitive — it is actually possible to fix the rate for the life of the loan.

The main advantage of choosing for a fixed over a floating rate mortgage is, of course, obvious. Certainty.

“Mortgage payments tend to be the biggest monthly outgoing for most households,” says Mark Whelan of Bonkers.ie. “And knowing exactly what you’re going to be paying each month can bring peace of mind and can really help with budgeting.”

But while fixed rates do bring certainty, they are not risk-free.

Suppose, for example, you agree upon a 10-year fixed rate of 3.5% (a rate which is currently available, subject to some conditions, from Bank of Ireland and KBC).

If the standard variable rate (SVR) rises above this level, that’s no problem, you’re completely insulated.

But if the variable rate falls below 3.5% over that 10 year period, you will be stuck paying back much more than you need to.

There are a number of other drawbacks.

Mark Whelan again: “If you receive a lump sum and want to use it to knock a chunk off your mortgage in one go, you may be charged an ‘additional funding fee’ for doing so. These fees don’t apply to variable rate holders.

And as Joey Sheahan of MyMortgages has already pointed out, the reason why the fixed-rate mortgages are enjoying such an upsurge in popularity in recent times has everything to do with the interest rate cycle.

The main ECB rate now stands at zero. While experts may differ on the timing of the next change in rates, there’s broad consensus on the direction.

The only way is up. Mark Whelan also points out that the Irish housing market has been through a period of remarkable volatility. Fixed rate mortgages demand a premium over variable products, but in the context of an unstable market, many consumers have decided that it is a premium worth paying.

Standard variable rates, a blight on the market

Both Whelan and Sheahan also agree that the failure of standard variable rates to move substantially lower in line with ECB rates has also fostered a drift towards fixed-rate mortgages.

Sheahan describes SVRs as a blight on the Irish mortgage market.

He says: “Quarterly data from the Central Bank shows that the average SVR for private dwelling houses stood at 3.32% in Q4 2017, whereas the average fixed rate mortgage rates for one to three years fell to 3.08%.”

The first step to securing the best value mortgage is to get in touch with your bank and confirm the rate of interest you are currently paying, the balance outstanding and the term remaining on the mortgage.

Ask your lender if you’re on the best rate and find out what fixed rate options are available. Then go see what else is out there.

Switching mortgages is far more straightforward than it used to be, and the various incentives offered by all of the banks will compensate adequately for the legal and administrative costs which are usually associated with switching, if that’s the option that ultimately makes the most financial sense.

“A lot of people are still struggling under the weight of these (standard variable) rates,” says Joey Sheahan. “We deal with clients on a daily basis who are unaware that switching could even be an option for them. Many believe that they are simply ‘locked in’ to the contract with their current lender. And of those who have heard of switching, most think it’s too much hassle.”

There’s no denying that dealing with the banks can be both time-consuming and stressful, but saving even a fraction of one percent on the rate you pay can generate thousands in savings over the life of a mortgage.

“A mortgage is most people’s single biggest monthly expenditure, yet it’s something that people don’t pay enough attention to when it comes to getting the best value on the market,” Joey Sheahan adds.

“Many people assume that once they’ve taken out a mortgage with a lender for 20/25/30 years, then that’s the end of the decision-making process. But mortgages are just like any other financial product — they should be reviewed every three years to ensure you are not paying over the odds.”

“Mortgage payments tend to be the biggest monthly outgoing for most households, and knowing exactly what you’re going to be paying each month can bring peace of mind and can really help with budgeting — Mark Whelan of Bonkers.ie