Where are the incentives for the negative equity generation?

Where are the incentives for the negative equity generation?

Looser Central Bank rules, generous Help to Buy grants for first-time buyers – but trader uppers are being left out in the cold 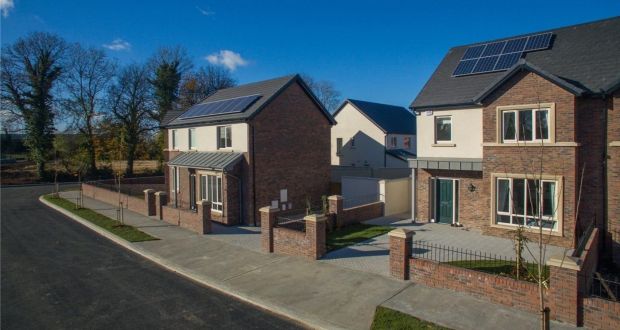 Carton Wood, Maynooth. A first time buyer would need a deposit of just €14,750 to buy a three-bed semi-detached house worth €295,000. Someone trading up on the other hand would need to come up with a significantly higher deposit of €59,000.

They paid too much for their home during the boom; their wages are stagnant; their mortgage is still underwater; they may have a cheap tracker but have ended up renting their own home and leasing another family friendly property at a hefty rent themselves. They’re the negative equity generation and now they want to trade up – but any help form the Government is going towards first-time buyers and not them. Why?

It’s a question many people of a certain age may be asking themselves following last month’s revisions to the Central Bank’s mortgage rules. For first-time buyers, the requirement to have a deposit of just 10 per cent – or as low as 5 per cent on a new build thanks to the help-to-buy scheme – means getting the funds together to buy a first property, particularly in Dublin, has become a good deal easier.

But what about second-time buyers looking to trade up? What has been done for them?

Until October, buying a house was a difficult endeavour for all; yes, it was easier perhaps, for first-time buyers, particularly outside of Dublin, as they only needed a 10 per cent deposit on a purchase price of up to €220,000, but the introduction of the help-to-buy scheme in October, plus the relaxation of the 20 per cent rule, has been a double bonus for first-time buyers.

In effect it means that a first-time buyer will now only need to come up with a deposit of just €12,500 themselves (thanks to the 5 per cent via a rebate of income tax paid from the help-to-buy scheme) when buying a new property valued at €250,000 – down from €28,000 previously.

But what about those trading up?

Joey Sheahan, head of credit with MyMortgages.ie, doesn’t think so, and he argues that those trading up should “at least be put on a level paying pitch” with first-time buyers.

“A second-time buyer in a lot of cases may have bought an apartment or small house back in the boom times when prices were far higher and may now be in negative equity, or may have outgrown their current property due to an expanding family. Some of those people would argue that they require a preferential deposit more than a first-time buyer,” says Sheahan, “In a lot of ways it’s the second-time buyer that needs the break more than the first-time buyer”.

He’s not alone. Eamonn Foley, a director with Sherry Fitzgerald, argues that help should also be forthcoming for those looking to trade up, noting that many who bought during the boom have since become “an unwilling landlord – and an unwilling tenant as well”.

“It’s something the Government should be looking at in terms of helping these people along the way,” he says.

But those who have clung onto their properties during the crash may argue that this is a harsh assessment.

Others suggest that first-time buyers should be incentivised, because they could well be spending an inordinate amount of their income on rent, while the trader upper may have a very manageable tracker mortgage on their property. Moreover, the trader-upper already has had their chance of getting on the property ladder (and possibly a first-time buyer grant too, before it was abolished in 2002).

Another point to consider is that the 20 per cent deposit is not an extra cost the trader-upper must face; it’s actually building up additional equity in their home, given that they’re borrowing just 80 per cent compared with the first-time buyer’s 90 per cent.

The problem perhaps, is that a generation of would-be trader-uppers in their late-30s and 40s bought at a period of peak prices – and there is a debate about whether this should be recognised in how they are treated today.

Historically, second-time buyers have been able to use equity in their home to fund a deposit on the purchase of their next home. But for a large cohort of buyers who purchased in the years leading up to the crash, this is simply not possible.

Yes, the number in negative equity continues to slide, thanks to a combination of people paying down their loans and rising property prices. But in some cases prices are still 30 per cent off the peak, and some 15 per cent of homeowner mortgage loans – a significant chunk – were still in negative equity at the end of 2015, albeit down from 20 per cent on the previous year.

Since the introduction of the Central Bank mortgage lending rules in February 2015, borrowers in negative equity have been exempt from the requirement to meet the loan-to-value element, it is not always that easy for people in this situation to obtain a mortgage at all. According to figures from the Central Bank, only 240 negative equity loans, worth €37 million, were drawn down in the first six months of this year.

A negative equity mortgage means that someone embarking on buying a new home and selling their existing property, could, in effect, borrow on a LTV even above 100 per cent given that they are carrying debt with them from their current home. But they also have to comply with the mortgage multiple rules, of 3.5 times their income – a difficult task if they have to add on another €30,000-€40,000 in debt from their current property.

And even if those trading up aren’t in negative equity, it may be the case that they won’t have enough equity in their current property to finance the purchase of a new home. If they bought their property in 2006/07, particularly if it was a house rather than an apartment, their mortgage may no longer be underwater. But selling their house is unlikely to give them a cash injection either, as they may just break even on the deal, leaving them to find as much as €80,000 for a deposit on a €400,000 sale price.

Selling first to get the deposit together

Another challenge for second-time buyers comes in the form of getting the property chain to work for them. Some banks will want you to sell your home before they will approve another mortgage for you. Even if they do approve it, you may still have to wait until your own home is sold before you can successfully complete the purchase of your new property, as you’ll need the funds for a deposit on the new property.

“It puts them in a far weaker position than someone who is fully mortgage approved,” notes Sheahan,

In a competitive bidding situation, a trader upper may be more constrained in making an offer, as every €1,000 they offer will mean an extra €200 towards the deposit – money they will have to have readily available to complete the deal.

“It puts them at a disadvantage,” agrees Foley.

Another issue is that a typical trading up home may be a 1970s/1980s semi-detached property; but these homes may need to be upgraded. Scrambling for a 20 per cent deposit may not leave much, if anything, left over for an upgrade.

In the absence of bridging finance, selling and buying a home as part of a property chain has also become next to impossible.

This means that, if you want to trade up, you may have to sell and move into a rental property while you search for a new home – and finding a short-term property in the current rental crisis is either impossible or exorbitant.

“What we’d often try to do is when someone has gone ‘sale agreed’ and has the contract out on their property, we’d say now is the time to try and find the next house. Where we possibly can, we dovetail the two to come together,” says Foley.

But if the housing market incentives are skewed towards the first-time buyer at present, remember that trader uppers also got something in last month’s changes to the rules.

At present, banks are allowed lend more than 80 per cent to 15 per cent of applicants, which means that this cohort could need a deposit of as little as 10 per cent, whether they are buying for the first or second time.

Fast forward to January, however, and the Central Bank has amended its rule on allowances to allow banks to offer LTVs of more than 80 per cent to 20 per cent of second-time buyers. This means that one in five of those trading up will not need a 20 per cent deposit. This is a significant improvement on the current arrangement, which applies to both first-time buyers and those trading up.

But if you want to be one of these one in five, what do you have to do? A good place to start, perhaps, is examining who has already received such exemptions.

According to research from the Central Bank, allowances for trader uppers are typically associated with younger couples (average age of 39 compared to 42 for those without an allowance), who have higher incomes, and a larger loan size.

Sheehan notes that banks are tending to give exceptions to people with ample savings, in professional, pensionable jobs.